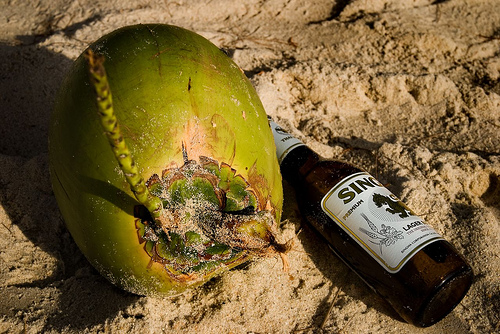 That could become reality if several Treasure Island homeowners get their way.

Tonight, the Treasure Island City Commission is holding an “emergency meeting” to tackle the subject of parking and public intoxication on the tiny strip of sand known as Sunset Beach.

(If you’re a little rusty on the names of beaches, Sunset Beach is the one with Caddy’s on the Beach, one of the most infamous beachside bars in Tampa Bay.)

How realistic is the possibility that Sunset Beach could become “dry?” I’d say very likely, considering the City Commission’s past. After all, the entire city was alcohol-free back in the day (it was overturned on referendum in the 80s). More recently, the Treasure Island City Commission has fought the scourges of paragliders, drum circles and library funding.

Read the wording of the alcohol ban here. Meeting starts at 6 p.m.

There is a large, but disorganized opposition to any ban, but they’re going to need people to come out and show support.

UPDATE: Amid overwhelming opposition, the alcohol ban did not go through.

2 thoughts on “An alcohol-free Sunset Beach?”